Just do the comparaison between Kutchek's work for promods and the work by SCS with the DLC. Kutchek's did a better work even with the space issue. For exemple, Toulouse was fantastic (with Blagnac, Colomiers and Labège), I really really miss this city...

For me SCS rushed some parts of France, espacially big cities.

by MG Mike
Hello, is there still no new developer for France? Too bad..

That's a really awesome landscape at this area. It would be interesting to have this expressway from Italy to France at Promods..

by EdgeGladiator
In real, this expresswayalready exists in France and is very well represented. Just missing Monaco.

Just seen it. But already not driven there. Mhm. Time to get a tour from Italy to France..

by Shiva
Regarding Monaco... SCS sort of done a ...
Here, possible connection if you build Monaco.
Toll's etc a bit simplified at the moment.

by EdgeGladiator
There is 2 possible access, an easy access to do is by la Turbie, the developer will only have to build Monaco behind. Unfortunately, this access is forbidden to the truck.
After the hard access is to build the A500 highway and the tunnel. More hard because you need to made a connection with the A500 and the A8, so he need to rebuild that part of the A8 and the toll. But honestly, it's largely possible to do it and it will be wonderful to do Monaco.

by Shiva
Yes, SCS simplified the A8 off ramps into 1 single.
Easiest, but not most realistic, would be to connect A500 to Monaco to the roundabout currently ingame.

The 2011 truck route can be seen in my signature.
But since then, they have made a new tunnel. And I think a new way to get to the delivery point"s".
Sadly I have not seen any newer dash cam's from that area.
I would like to see a dash cam from 2018/2019. With the new route.

Viewing distance etc might pose a big problem, atleast on the A500 between the tunnels.
And that there would be only 1 realistic delivery point, or 2, very close to each other.

by MG Mike
So I have a tour from Verona to Zaragoza actually.. Best opportunity for using the A8 in France..

And I am already in Spain. The ride along the coast in Italia, France was awesome. Unfortunately the Area with the mountains and many tunnels and seaside is too fast over. But I know it is because of the little scale.. At such things you can realise how small this 1:19 scale is.

Is this route completely made by SCS or is there work from Promods in there?

by brainiac
Completely by SCS.

), to be exact on eastern France: Alsace.
The reason why it moved me to start in this area is the current situation there ... pretty empty here; furthermore the A35 is really strange to me indeed.
The first step for me is adding the interchange A 35/A 36 near Mulhouse and to rebuild the border crossings to Switzerland (including the road to them of course).
I will probably help out and improve/add some areas in Germany as well but this is limited to Baden-Württemberg for now as eastern France is my main focus.
Here a small concept map of mine:
(If you have quesions about further development I have no idea yet this will already take its time. After that I will put further infos in this thread then.) 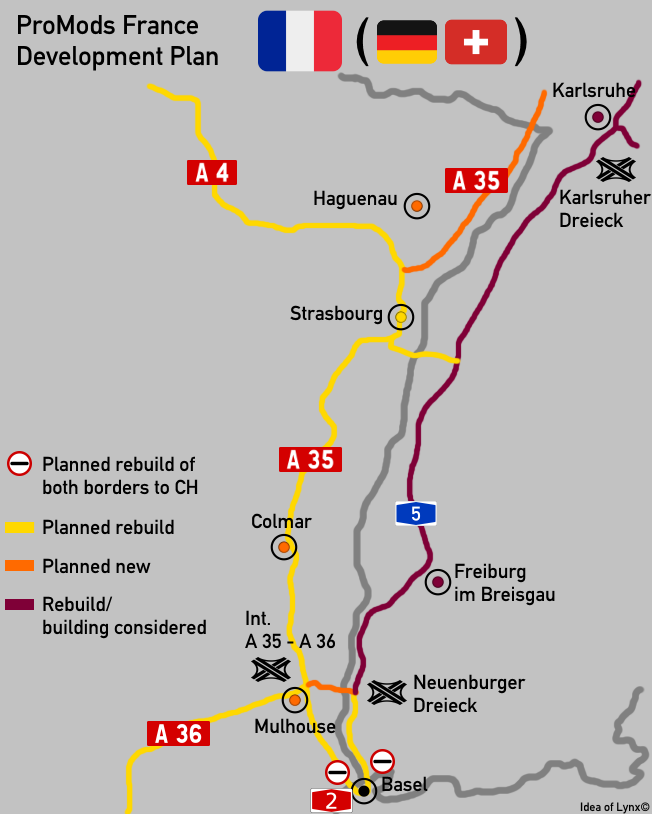