by TimG95
Very nice what you have built Nico and you integrated it well into the scenery.

Will A 72 have exits e.g. to parts of Chemnitz ? And what will happen to Münchberg Nord, I mean will there be another rest area if it has to be deleted because
of space issues ?

by MandelSoft
The rest of the Germany rebuild has yet to be decided. It's technically very difficult to merge some areas, especially around Kassel, since the BAB44 present in ProMods messes up everything SCS (well, mostly me) made in that area. It's far from trivial, and we need a lot of team-wide discussion to agree on what approach we should take. But we also should keep in mind that we shouldn't break open a too large part of the map, since we have enough projects running already. I'd rather see those projects being finished before we create new "problems" that can delay a release...

by MG Mike
Yes I think also it is better to have the A44 at Kassel. But maybe you can change the landscape there a little bit to the look from you official work..

By the way, is it only a feeling to me that the city Kassel is at higher position at SCS Version compared to Promods?

Mandel soft, did you also do the Werratalbridge at the new SCS Version? She looks very similar to the Promods pendant exept for the missing emergency braking lane.. And I like this very heavy looking roadsigns at the bridge there with this far blue metal posta.. Would also looking good at promods

Edit:
I took I flight over the region at the map and I think there is not much but a little bit space for the A72 up to Leipzig. If you do a cloverleaf crossing after that a little bit further the Autobahn has to become a Bundesstraße and leading through under the A38 and could lead into the city.. Sure It would be a short stretch.. Like Bremen to Bremerhaven which is also very short. In real life there are several exits, even Bremerhaven has 5 exits.. Promods Brhv has the northest of all.
So I think it would be possible to let the A72 to Leipzig.. But that is up to the team to decide..

I saw another Autobahn which is interrupted and this I think is possible and should come one time in the future.. I talk about the A71 which leads from the A38 to the south and after a Tunnel it becomes a country road. Further westward there is an Interchange from A7 which is also the A71.. According to Google maps it is a through going Autobahn, so this should be in the map one time..
And also the A73 could lead from Nürnberg further to north and I think it meets the A71..

So I look forward what you have to be planned..

by sven_engelen
I made the Werratalbrücke. There is space for the A44 but then exit Kassel-Ost should make space for it. I think it's better to build the A45. There is more than enough space for that highway.

How is Tregion going on?

The A44 is already at promods. It connects the A7 with A1 at Dortmund. The A45 is also there but it is still the old SCS Autobahn it leads from an Interchange near Frankfurt from the A5 up to Dortmund and has also an Interchange with The A1

by sven_engelen
The A45 connects the A7 with the A1 in Dortmund too. And it gives chances to connect the A4 to it near Olpe. I think the A45 is a better option than the A44

by MG Mike
Aehm... Sven.. I am sorry but I don't understand fully.

The A45 is better option for what?

Both A45 and A44 are already part of Promods and I think both can stay. As far as I know one mapper has in this threat showed some screens of his work on A45. He probably rebuild it.. But I don't know the actual status. That should rather be known to the team.

Originally I made a suggest t
For Kassel. To this Mandelsoft has already answered. I don't know exactly what we are now discussing..?! As written A44 and A45 are both part of the promods germany map. But A45 is still old scs Autobahn..

by MG Mike
Hello there,

i have two little requests to Promodsteam.

I have bought an additional garage in Dresden and it fell into my eyes, that there are closed roads, that must not have to be closes, you could drive there without problems.
i use a mod that removes barriers, but the barrier there is unfortunately still there.

So my first request is, can you or would you please open this road and make it visible in the roadmap and navi ?

I mean here this roads between the road to the farm company (left down and right up) and the main road leading to A4, and that little "middle" road that leads to the big cross and into the center of the city. (middle right of the pic) 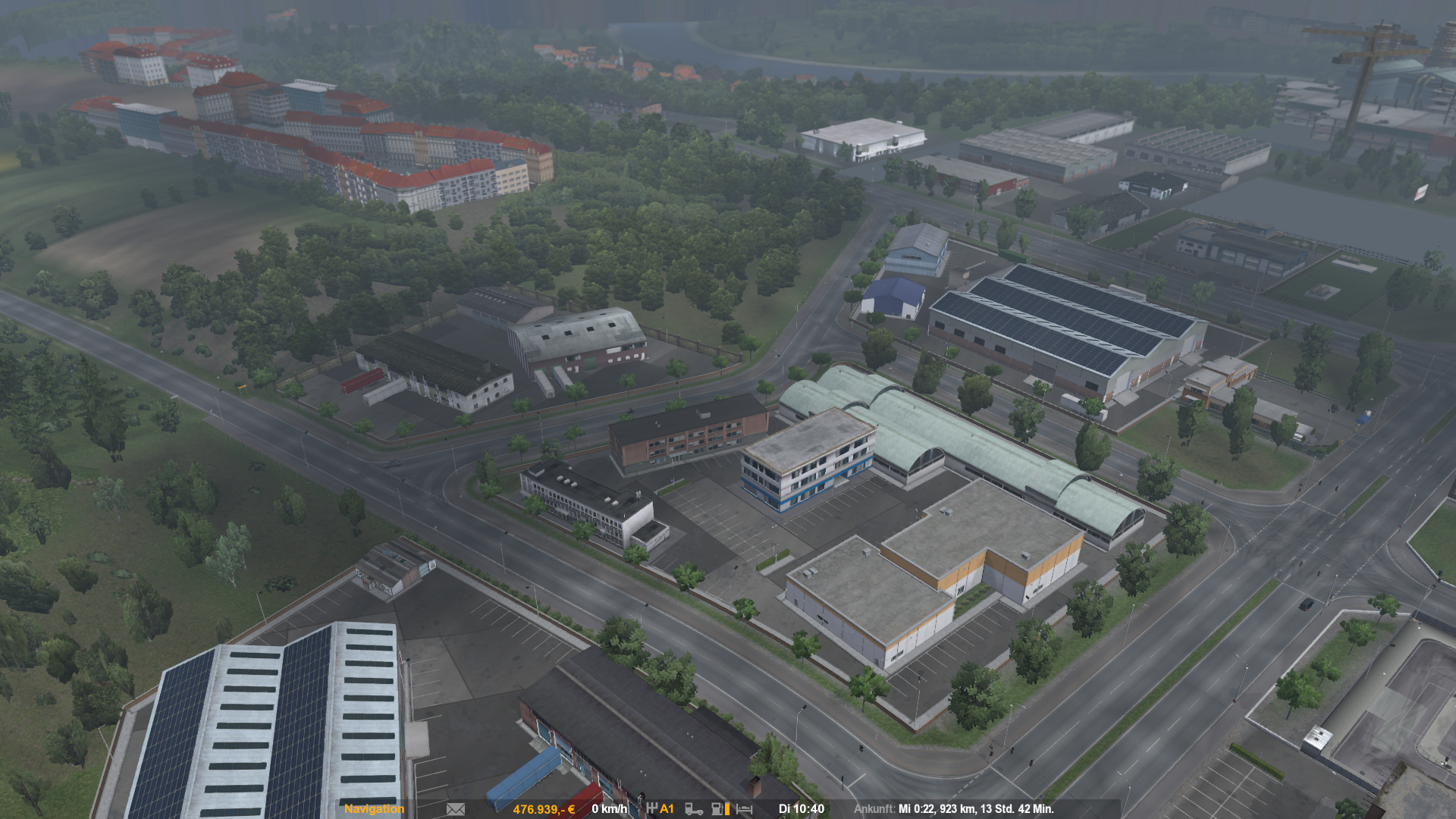 And they are in Dresden at his coordinates 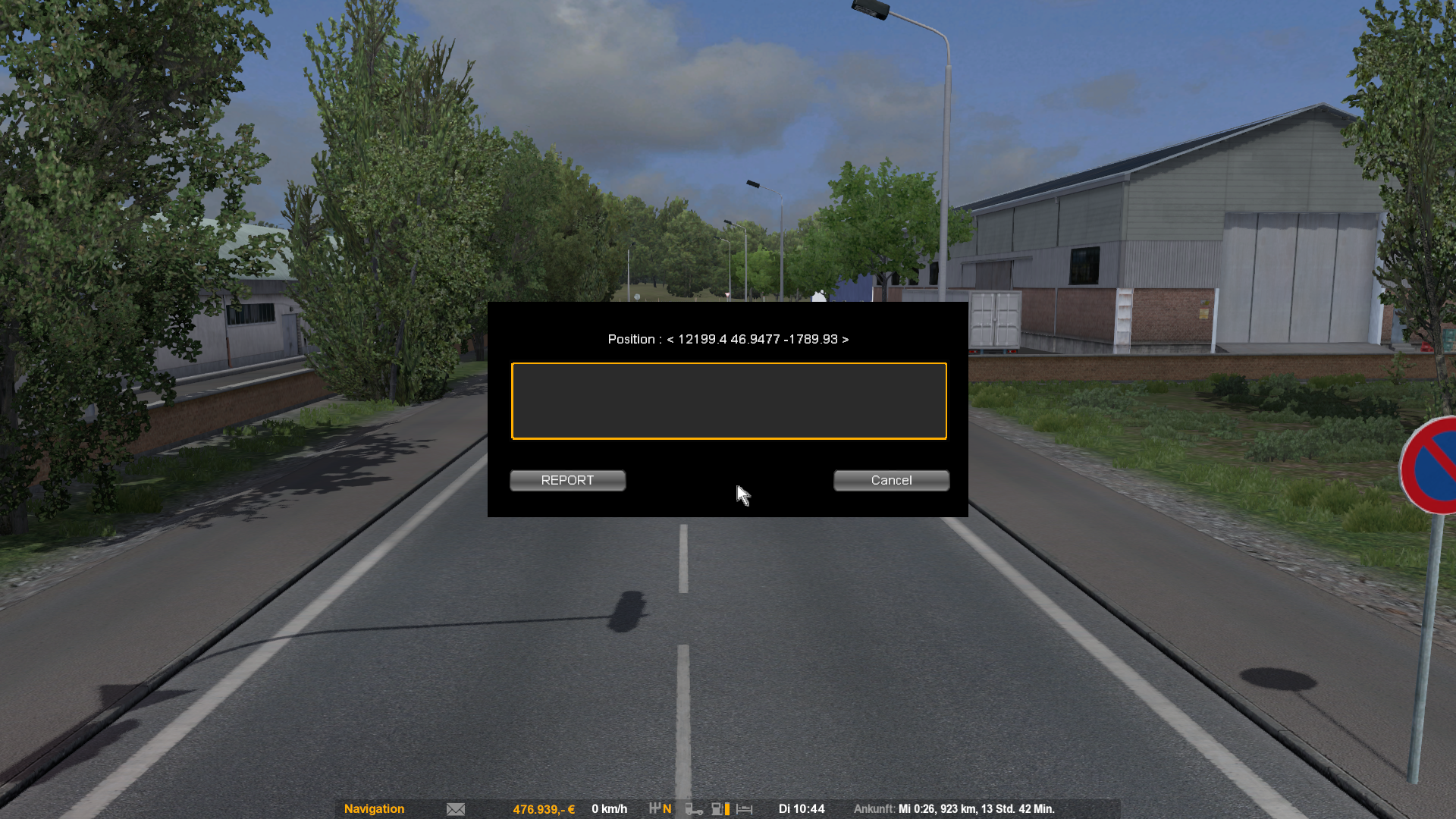 And second regards the road with the connection to the A4, In the Vanillamap it is driveable furthermore up to Leipzig or Magdeburg or both. 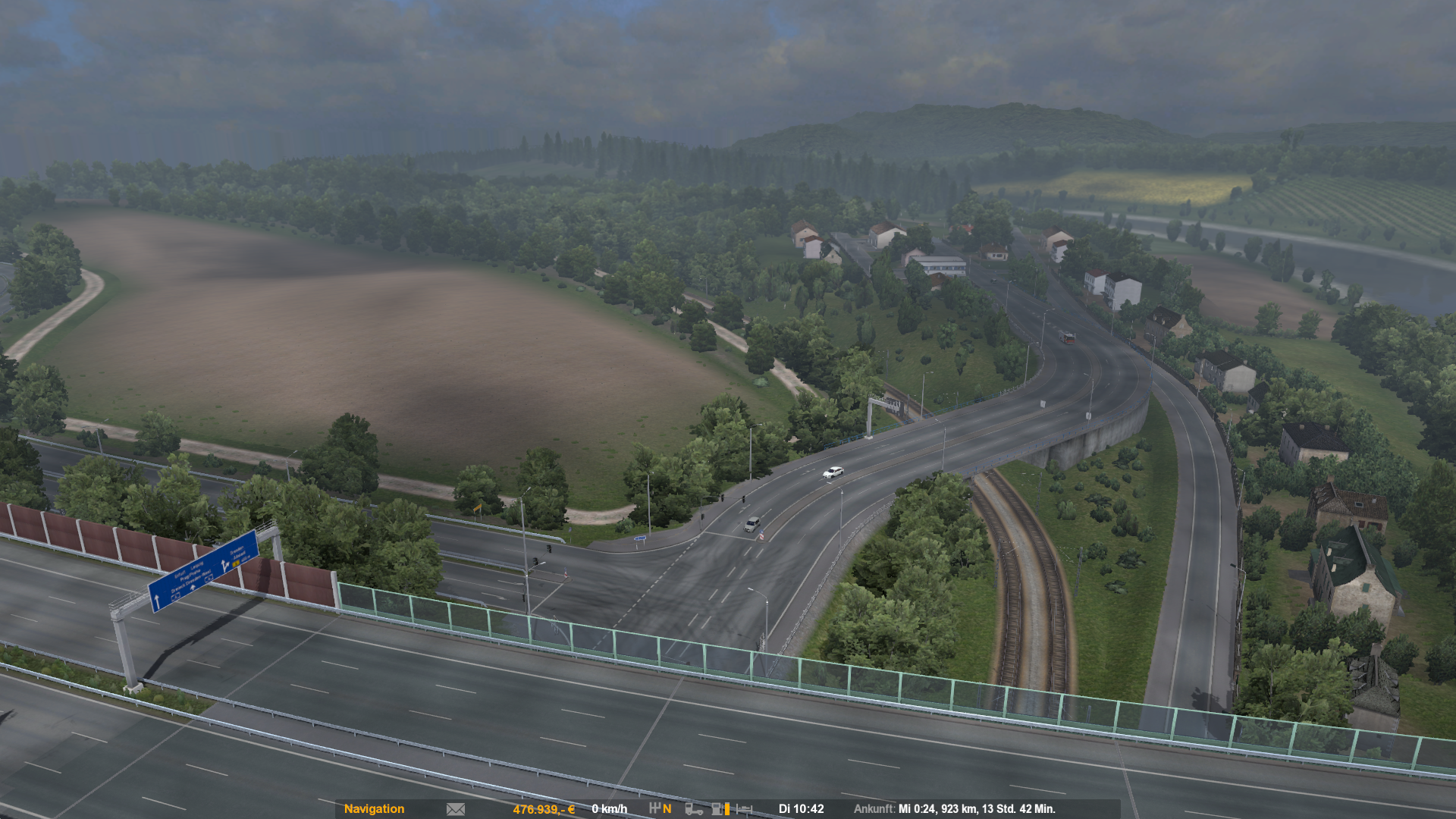 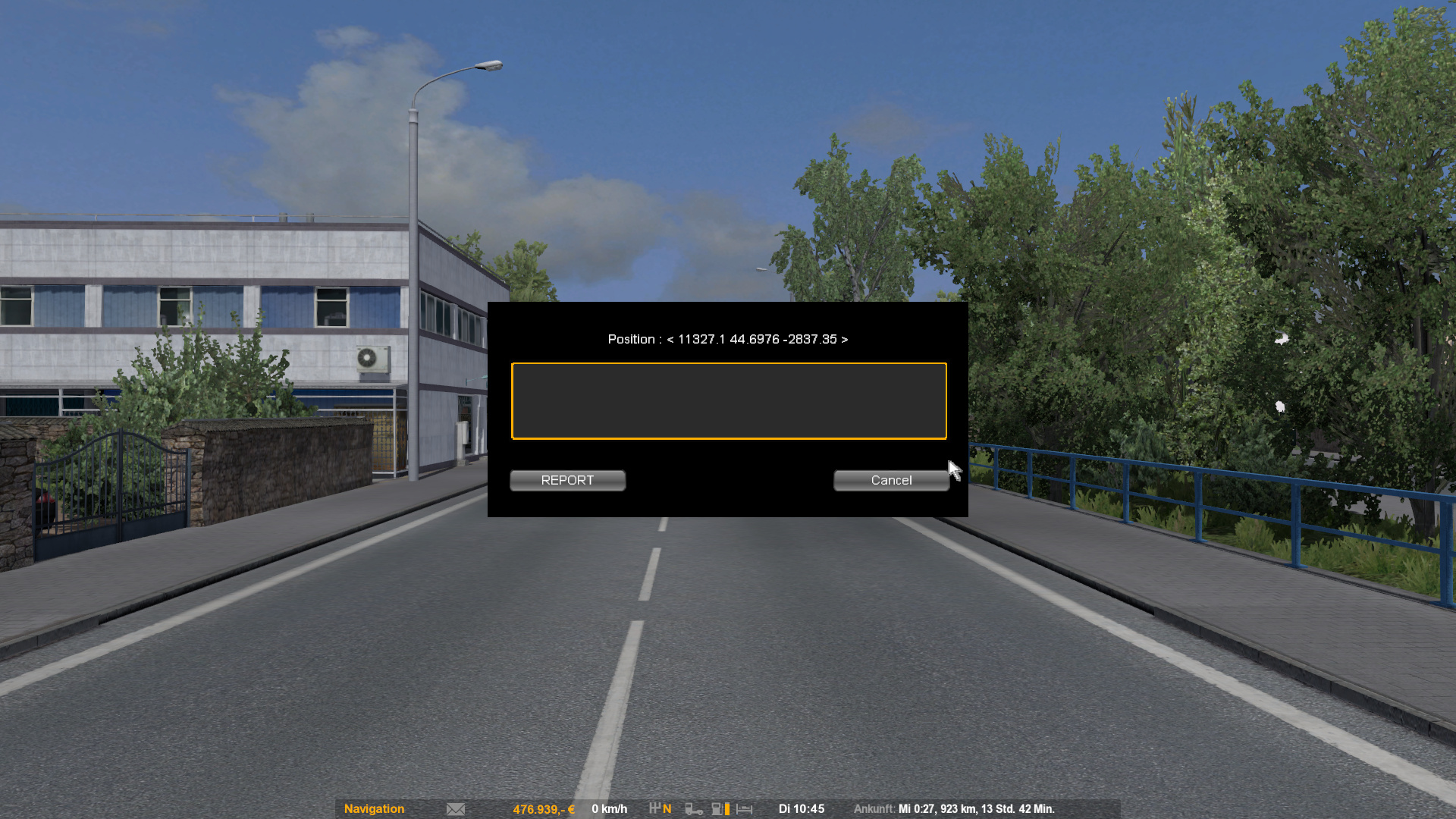 maybe you can reopen it and let it lead to Leipzig for Example In Vanilla it has a beauriful landscape along the river, i think it could be the Elbe.
Maybe one of you could bring it back with a few improvements more scenery for example. We have anyway too less countryroads at promods germany.

So that are my requests. I wish a good weekend ans always a good ride !
MG Mike

by Arvidsson-Källqvist
I'm a quite tired so I'm a little confused, you mean the currently missing part of the A14 between Dresden and Leipzig is actually already built, just barricaded? Or what connection to the A4 do you speak about that is driveable up to Leipzig? Removing those blockages is very easy in the map editor. (Tho they probably have some strong reasoning behind why it is closed)

if you are so tired, go to sleep. There is no need for answering to me in the middle of the night

But i show it again, this time i marked the roads i mean: 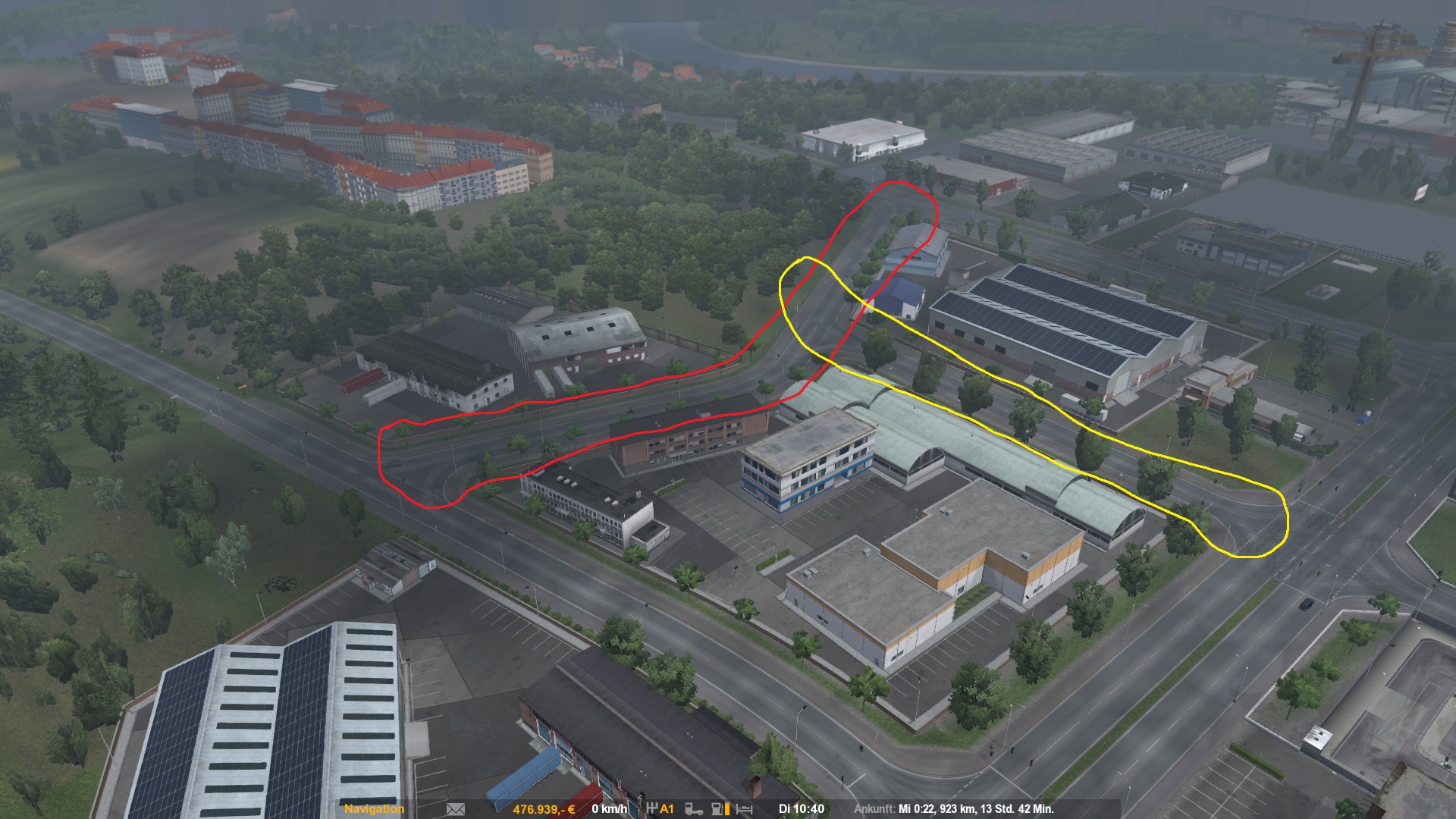 The roads in the red and yellow markings are closed. But there is no need for closing, at least not to me. There are no gaps in the map or something else, they look as normal driveable roads.

So my request is to open up the red and yellow road for us. i know there is nothing to do, no company or else, but it would be nicer if all roads without dead ends were open for us. 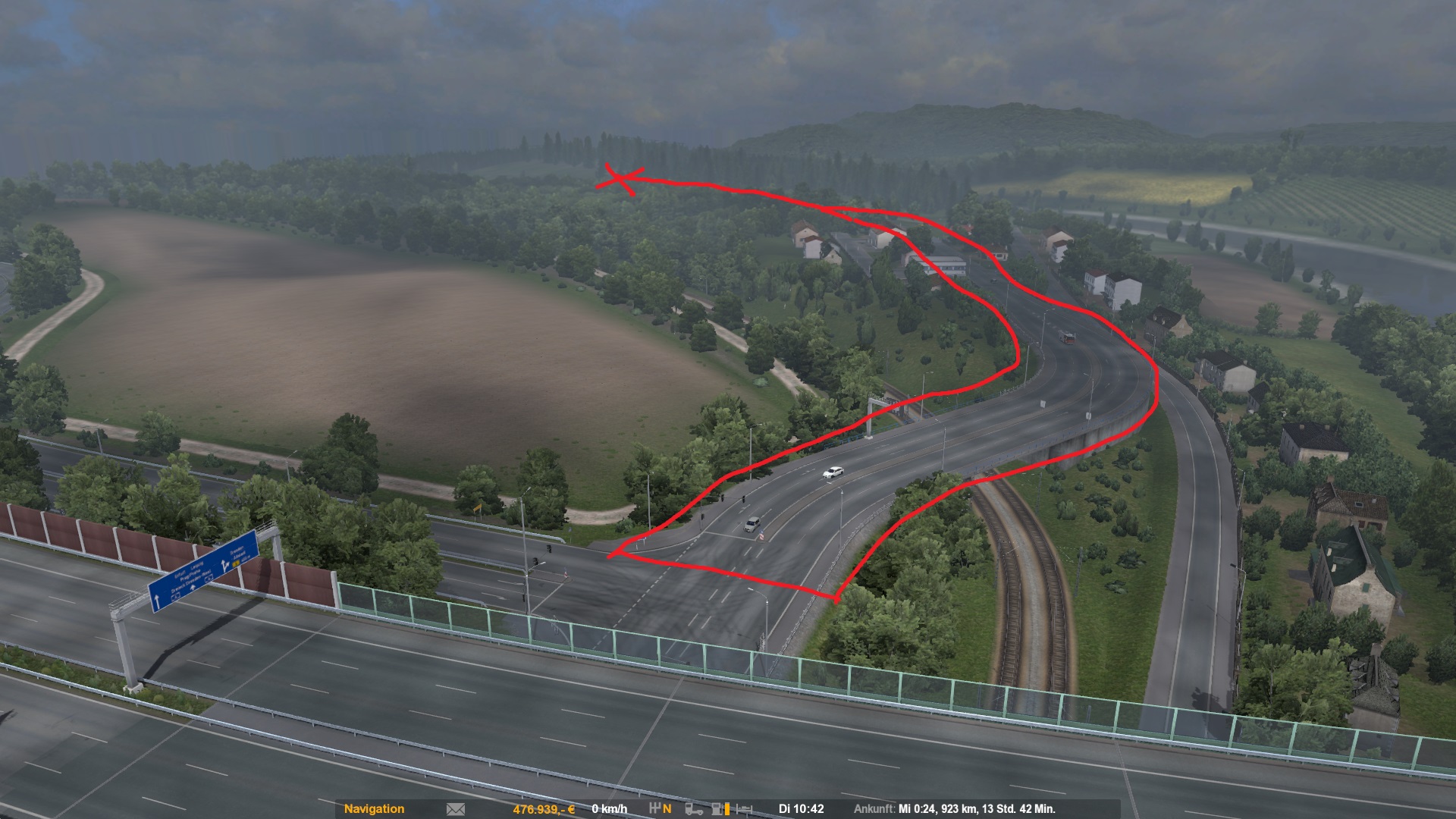 the road in the red marking is closed and approximate at the red X there is a cut.
At the Vanillamap this road is full drivable and leads to Leipzig and Magdeburg.

i was in the mood and "drawed" a little in the map. I added some ideas that came to me when i looked at the area at google maps. And so i have made a few additions on the roadmap as possible suggestions for this area.
The green stretch of A 14 i think this is already panned, The red stretch of A143 is a question of space. it could maybe a small connection like the A261 in Hamburg between A1 and A7.
The yellow lines and yellow/Black numbers are Bundesstraßen in that area, that could connect the cities there. Maybe there is space for Weimar as drivable city and Naumburg (Saale) (Have never been there, but it is in this empty area)

And A72 is planned but only ending at A4. is there really not enough space to build it up to Leipzig ?
Promodsteam already managed to build in small areas like Bonn/Koblenz.. 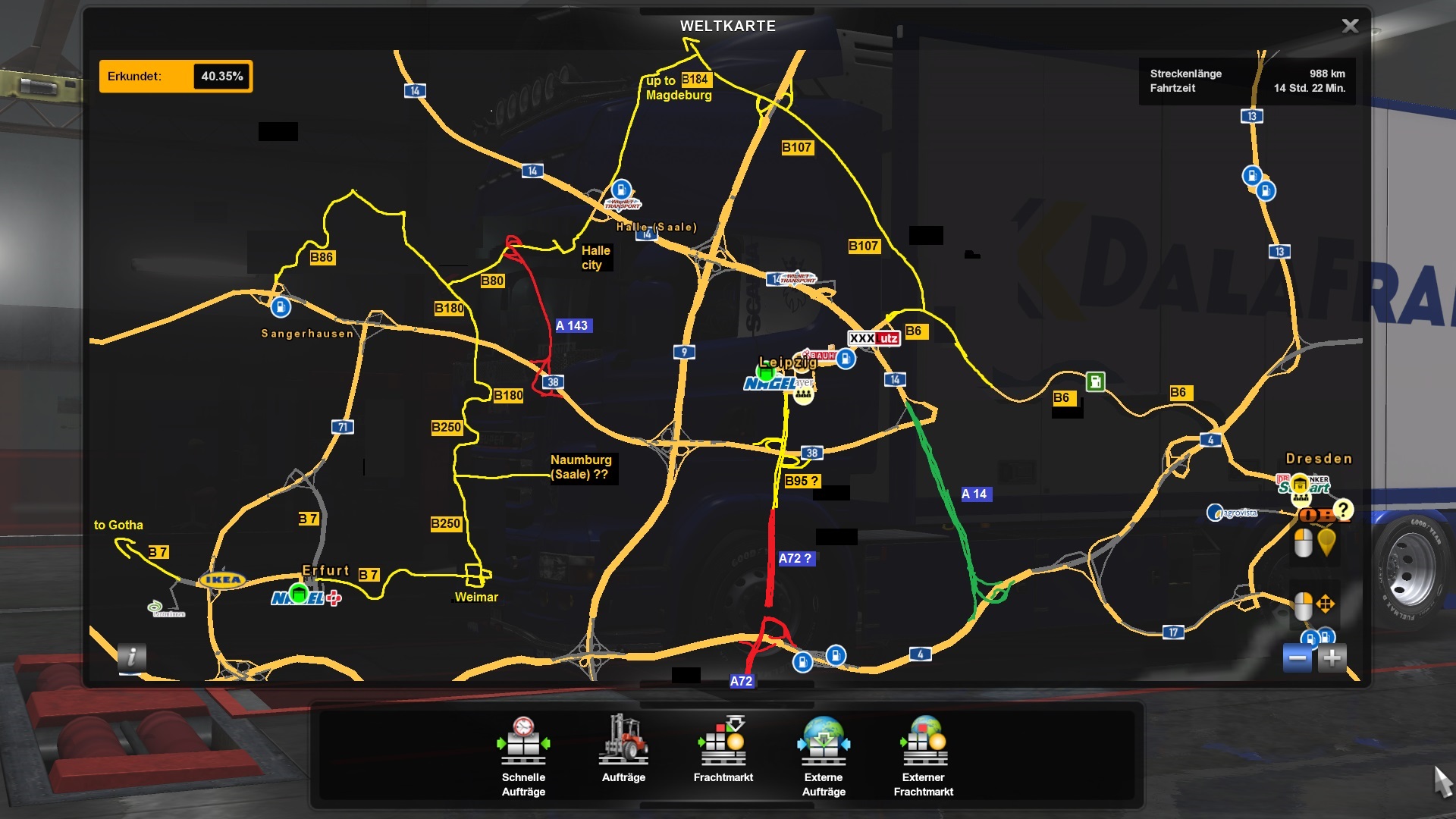