by TheNuvolari
Honestly, 90% of the most important sights are in the central of the city. The only thing I can think about is the Alba Plaza (Mall). by JohnBart
I'll try to compile some tips regarding the sightseeings and the notable industrial destinations that may be nice to appear in the city. I'll let you know once I have it ready (I need to do my own research on this, as I only rarely visit Székesfehérvár).

by JohnBart
Okay, here are my two cents regarding what locations could be represented. If anyone is living in Székesfehérvár, they are more than welcome to challenge the recommendations below.

First of all, here is an overall map listing all the locations I'll mention below, both industry and landmarks: 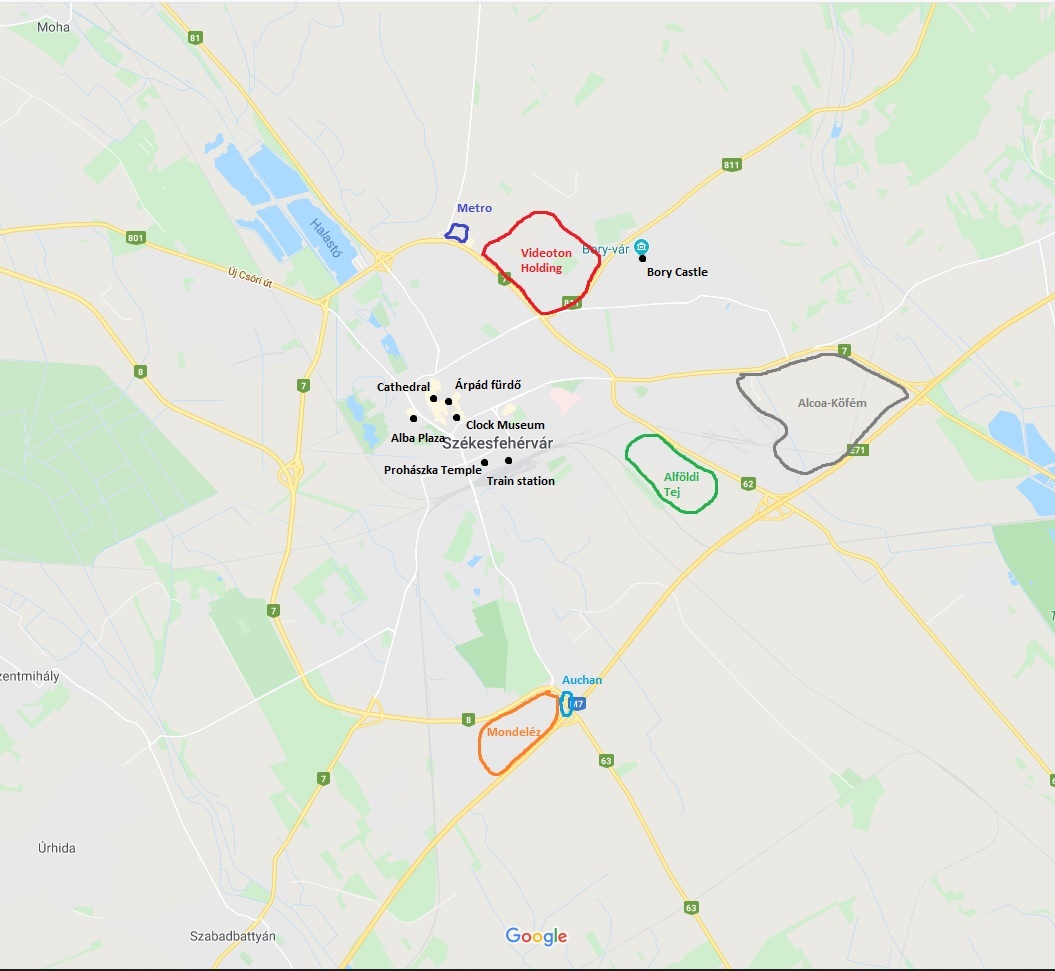 Székesfehérvár is notable for its numerous industrial parks and multinational companies present in its vicinity, so it's a bit difficult to pick the ones who should appear in the addon. That said, out of these, I think the most important ones are probably the following:

a.) Videoton Holding (consisting of numerous companies with names starting with a VT-prefix), its industrial park located on the north bordered by roads 7 and 811. The holding mostly covers mechanical engineering, materials technology, and electronics.

b.) Alcoa-Köfém (or Arconic-Köfém, according to its newer name), the largest aluminium industry company of Hungary, located between roads 7 and E71 (M7) to the east. The Alba Industrial Zone (giving home to numerous other companies) is also located next to it, but for space reasons, I think it's enough to represent only Alcoa here if you wish to build destinations in this area.

c.) Almost opposite to Alcoa-Köfém, on the other side of Road 62, you can find Alföldi Tej, one of the largest dairies of the country.

d.) The southern industrial zone between roads 8 and E71 (M7) also gives home to several multinational companies (Grundfos, developing pumping devices; GEALAN, manufacturing doors and windows; or Mondeléz, a food industry company). Any of these can be represented here, though I'd recommend Mondeléz just to give some variety to the available industries in-game.

e.) If you want to represent department stores, your best bet may be the METRO in the north (along road 7) and the Auchan in the south (next to M7).

As said by TheNuvolari above, most of the city's landmarks are located in the city center (namely, in the Palotaváros district). The only exception to this is the Bory-vár (Bory Castle) which is located at the north-eastern stretch of the city, not far from Road 811.

Since the majority of the landmarks are cramped in the pedestrian-only zones of Palotaváros (definitely off-limits to trucks), I'm not sure how you can represent them and if you should represent them at all - I think that faithfully building the main avenues and ring roads of the city should be enough (as was the case in PapierSUHD's Debrecen). If you happen to model the Old Town as well though, then you should probably prioritize the Basilica, the Prohászka-Temple and the Train Station. But just my two cents.