Mr Larrington wrote:Don't know why the notice on the wall says the building is "Government Of N.W.I. Area Offices Inuvik" coz I think I'd have noticed if I'd driven to Canada

Kobra2112 wrote:I'm not entirely sure, but I think that model (or maybe just the sign) is from one of the old 18 WOS games.

Supralisma wrote:Looks like ProMods is busted, maybe it could be a prefab borrowed from 18 WoS: Extreme Trucker?

This building model, with this Canadian sign, is used in several places throughout the ProMods map, and has been in the ProMods map for quite a while. You simply haven't noticed it before.

The first time I saw it, I also assumed the model was taken from 18WoS: Extreme Trucker.


Master_of_the_roads wrote:You're right of course, but this small mishap wasn't intended at all by the PM Team, in fact, they might be working on some small fixes already to alter that sign's appearance and make it less Canadian and more Norwegian.

How do you know what was intended or not?

by Master_of_the_roads
I can't know that, but my best answer is that I'm just guessing the sign wasn't intended as in Canadian style but Norwegian. Instead of misinterpreting my comments from yesterday, would be best to ask the PM team for some details about that particular choice for that sign. I've glanced at that picture like everyone else did and just made an estimate, feel free to correct this if it isn't clear enough. Back to topic, please.

by SilverShadowPT
I decided to get a bmw E30 mod and do a quick drive from Poland to Longyearbyen, passing by Russia, and I must say the work is fantastic, i loved the twisting and bumpy roads on my way there (crashed the car about 7 times lol). And I also never thought I would be having fun drifting in the snow on a trucking simulator. Well, until I fell off into the twisting nether by managing to go to where i shouldnt be lol.

Now I need to check the southern areas. I think I might just drive all my way down to Italy and finally end in Barcelona and check what those fps drops are like.

This map is absolutly amazing, everyone involved in this project has my deepest respect for the amount of high quality work they do.

by Supralisma
You guys sure weren''t joking when putting the 4x4 Warning sign on the road up to the Steinbruch in Kirkenes. 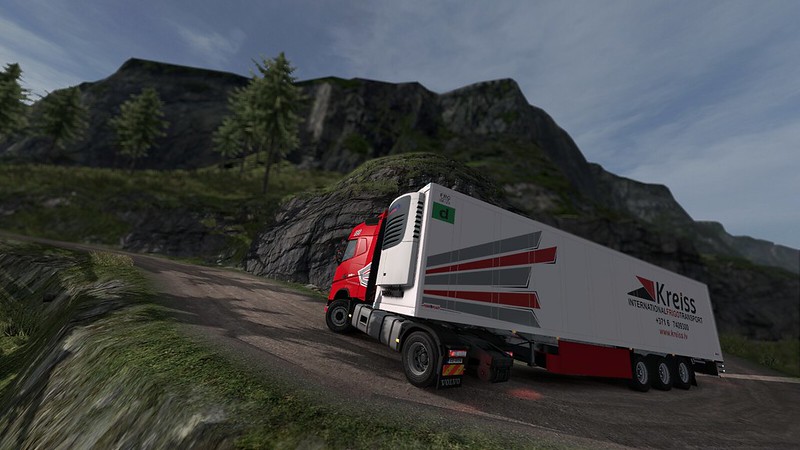 by T6A5
I too really enjoy the depictions of Murmansk Oblast. It's a very dynamic and unique area, it's definitely become a favorite of mine.

by Googlefluff
Like everyone here, I can't help but say how amazing the Murmansk/Kirkenes/Svalbard region is. Absolutely stunning, and the bumpy, off-cambre roads are a blast!

gavt1976 wrote:I have to say well done Promods team, you guys have done amazing job with this map and i am really enjoying it, and yes there is a few bugs with it and i know that there will be a hotfix for it as well.

Now i have got a question for you guys.

1) Why are there pink ships in the game and what happen to the ferry link from Portsmouth to Bilbao, because the link it not there, but it was on Squirrel stream a few weeks ago.

I already did a post to promods about that. they said it because the (any) garage mode and the problem is there, so...

by Stuferus
real nice work as always.. cant wait for the hotfix so this gets drivable